Around 70% of app developers use a tool or framework to build competent mobile apps these days. These frameworks simplify the development process and bring a perfect outcome ahead of the deadline. Xamarin App Development is a great example of such a framework. Xamarin is a cross-platform framework that helps developers to create apps for multiple platforms without any extra time or effort.

Using Xamarin, the developers are not required to do multiple coding for different mobile OS. Otherwise, they have to build different versions of the same app for various devices and platforms. As such, Xamarin App Development brings flexibility to your mobile app usability. Consequently, you can target a bigger audience with your mobile app, products, and services.

Xamarin is the 5th most popular app development framework in the world. Over 11% of app developers use this framework worldwide. Its popularity is still increasing because of the new features and functionalities added. Moreover, the framework is open-source and therefore gets ample user attention. Xamarin App Developers get many other facilities for building a perfect app.

In this post, you’ll get a detailed insight into the framework and its different benefits for your app-building project. So, let’s proceed!

What is Xamarin Framework?

Xamarin is a mobile app-building framework used to create cross-platform apps. It is a product of Microsoft and is used by worldwide app developers. Established in May 2011, today it is used by thousands of app developers worldwide. Apart from cross-platform projects, the framework is used to create native iOS and Android apps. So, the demand for Xamarin App Development is rising among the developers and app businesses.

Xamarin comes with multiple libraries and tools to help developers create native-level cross-platform apps. Native apps are used to target a specific audience using a particular device and OS. Xamarin App Developers take care of such devices and include custom features into the app to establish relativity. The app users recognize such app functionalities and don’t switch to other alternatives on the app store.

In this way, the Xamarin framework is used to develop a variety of apps to target various audiences! 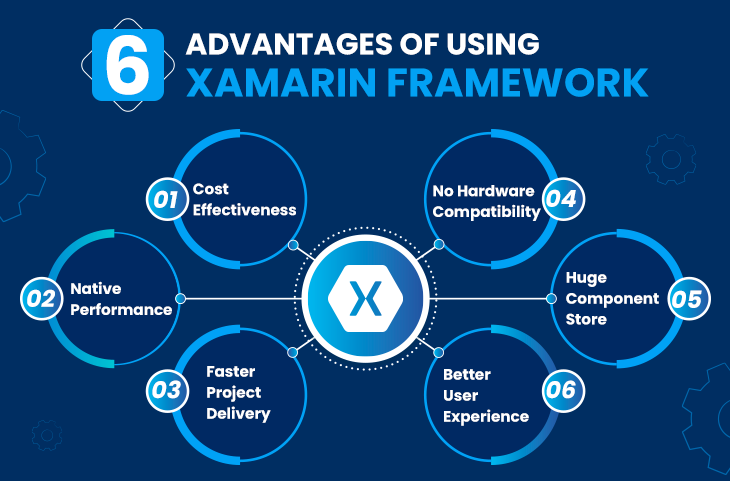 If you’re a start-up and planning to create a mobile app, Xamarin can help your business grow impressively before and after the app launch. However, you need to find a Xamarin App Development Company first. You can also hire freelancers providing the likewise services if not sure about a higher project budget. Enlisted are the 6 benefits of using Xamarin for your app business:

For a new company, the value of a business investment is very high. Most new businesses are incapable of doing a big investment because they are at risk. They expect an excellent ROI as per their investment plan. Generating a native app is the wrong idea for beginners. So, they approach a cross-platform app development team. And, cross-platform app building is a budget-friendly approach because the developers can use affordable tools like Xamarin.

Cross-platform apps are also expected to give a native performance. The solution is Xamarin App Development Company. App development professionals at these companies do what client requirement suggests. If the client is not so concerned about the native audience, the developers are also not. However, some developers suggest the client about the right move. Some clients don’t understand the power of native performance.

The app development operation is not over after the app launch. The app company has to promote its product on various platforms. Therefore, timely completion of the app development project is very crucial for business growth. Using Xamarin App Creation Service you can finish a cross-platform project on time. That’s because you don’t have to write new codes for creating multiple versions of the app and you don’t learn various programming languages.

The issue of hardware compatibility usually arises when you build an app for various devices and OS. The app companies have to create different native apps representing the same brand, products, and services for different types of devices. But, Xamarin App Development successfully resolves the issue. The hardware compatibility issue takes place due to iPhone users. The platform allows app companies to create cross-platform apps for both iOS and Android.

Additionally, Xamarin has got a huge component store for developers to show their creativity. Xamarin App Creation Services are focused on new app features and functionality. The user demand for new features keeps changing and that’s what a mobile app update is all about. Your client may request you to add new features like- AR Integration, VR Integration, IoT Integration, etc. Therefore, the Xamarin framework also keeps updating from time to time.

Xamarin app-building leads to a great user experience. Though it is a cross-platform framework, the app performance can’t match the native functionality but it still performs remarkably. The app developers try to bring more user accessibility into their mobile app for enhanced user experience. Moreover, they collaborate with the UI/UX designers and explain to them the client and user requirements effectively.

The communication and collaboration between app development professionals and designers are very important to generate an effective outcome for the project. Moreover, digital marketing professionals also have to stay in touch with the developers and designers to promote the app effectively. Xamarin App Development is also influenced by effective communication and great teamwork among the developers, designers, and marketers!

The requirement of Xamarin App Development will further rise as more app-building projects are approaching the app market. There will be more smartphone users in the world and mobile app companies have got a great opportunity to set up an online business on app stores and search engines. If you want to raise your online business presence on these app stores, get started with a Xamarin app today.

How to Build a Nice Tracker App Like Celltracker.io?

What’s the Cost to create an App Like Snapchat?

There are multiple location in USA , UK , UAE.